Is there too much competition among nonprofits?

Thank you for the question! It brings front and center one of my pet peeves and core beliefs about fundraising and nonprofits, and gives me an opening to talk about my “general theory about everything.”

It’s a pretty simple theory, really. Competition or collaboration? Those are the two options. What will drive someone one way or the other? I would argue that power and wealth are the roots of all evil… or good, depending on the situation.  (For nonprofits, I would substitute purpose for wealth.)

Why do unions forms? Lack of power motivates individuals to band together. What happens as their power increase? Competition. They’re not eager to give it up easily. Why can you get day laborers for so cheap on LA street corners? Lack of wealth spurs competition.  It’s much easier to strike a deal among people of relative wealth. That’s why and how Bill Gates has had success rallying the mega-rich.

Competition in the nonprofit world comes in many forms and at many levels. There’s the “That’s MY prospect!” attitude in development offices. (Volunteer fundraisers can be equally prone to hoarding prospects.) There’s the “We’re so much more important than they are!” attitude among nonprofit organizations.

I am not unsympathetic. There are fundraising targets (and very real needs) to be met, and a finite number of donor dollars to go around.[1] But treating it like a win/lose competition is not the answer.

In my experience, high-performing nonprofits are far more likely to be cooperative than competitive.  How do they do it? If you can agree on what you’re trying to accomplish, you’re much more likely to get cooperation; and the higher the purpose, the easier it is to agree. 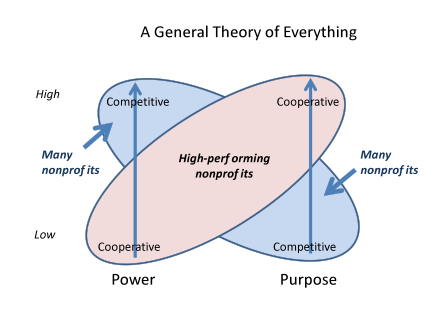 Let’s look at one example.

I was at a board meeting of a conservation group that I support. The discussion turned to fundraising. Other local groups, we were told, seemed to be doing quite well with membership drives and giving campaigns. What was wrong with people? Why weren’t they giving to us?! We deserved it!!

I listened for a while, and then felt compelled to share that I was one of those misguided souls; I actually was giving to nine of the other 32 land conservation groups. Why? Each addressed a different aspect of the broader problem I wanted to solve (land conservation); a particular parcel of land, or a particular conservation issue, for example.

“Why not collaborate?” I suggested.

I am pleased to report that we have made some progress on that front. A number of the area groups now share information about members and donors, with their knowledge and approval, of course. The purpose of that sharing is to inform our constituents about our various efforts and how they fit together, and encourage them to continue and even increase their support. A win/win solution.

Our band of conservation groups illustrates another benefit of collaboration among organizations with complementary purposes: leveraging scarce expertise, to improve the cost and quality of services.

The legal issues around conservation (easements, for example) can be quite complicated. One conservation organization was particularly strong in this area, while the rest of us were muddling along, or complaining about exorbitant legal fees, or both.  The solution? That organization now provides specialized legal support to several other groups, on a fee for service basis. We also rented shared space for administrative functions of that and several other smaller organizations. Another win/win.

SummerSearch[2] adopted a collaborative model from the get-go, deciding early on that it would partner with other organizations to provide the full array of services that its students needed. It was better for the kids; they were served by organizations and people with specialized skills. It was better for SummerSearch and its collaborators; overhead could be spread over a number of organizations. And a happy by-product was that donors often contributed to multiple players; they wanted – and were willing to support – the whole package for SummerSearch students.

Have you had positive (or negative!) experiences with collaboration? We – and your fellow readers – would love to hear about it!

[1] I might argue with myself on that point, though. A compelling case for a cause can increase donor awareness and willingness to give (and give more), thereby increasing the size of the pie.

[2] SummerSearch is a leadership development program for low-income students.

This entry was posted in Fundraising Q&A. Bookmark the permalink.