Getting To Giving Team 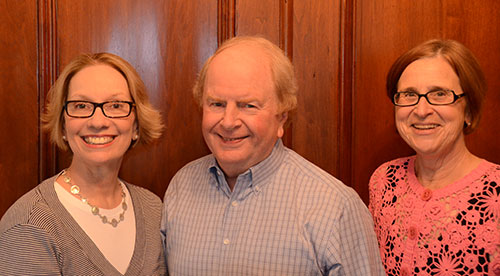 As a friend and colleague put it, “Howard has made the money, donated the money, and helped raise more.” His commitment to philanthropy traces back to his roots; his family was deeply committed to community service. His approach reflects a belief that every organization – including nonprofits – must be entrepreneurial.

Howard began his career at the Harvard Business School (HBS), where he earned MBA and Doctoral degrees. He would spend most of his 45-year career there, with a brief departure in the 1970s to get some hands-on business experience. He was lured back by the challenge of building a new entrepreneurial management program, which has proved to be his legacy at HBS, and a powerful influence on entrepreneurial education and practice worldwide. Howard has authored 12 books including Entrepreneurship in the Social Sector, and over 140 case studies. A chair was named in his honor by HBS, upon his retirement in 2011.

Howard’s HBS career has included a key role in fundraising efforts. In 2000, he was named dean of external relations and charged with the school’s first ever capital campaign, which raised $600 million, 20% over goal. That success resulted in a fundraising role at Harvard University, as vice provost for planning and resources. Howard also has been involved in HBS’ publishing operations for many years, and continues to serve as chairman of the Harvard Business School Press. Read more about Howard’s legacy at Harvard Business School in “The House That Howard Built” which appears in the June HBS Alumni Bulletin.

Howard’s business experience includes serving as president of the Baupost Group, a private investment partnership that has enjoyed success over the years, and grown to a $23 billion company.  He now serves as vice chair of its advisory board. He has been a director or trustee of over 40 organizations, including 14 nonprofits such as National Public Radio, the Massachusetts Nature Conservancy, the Boston Ballet, and Mount Auburn Hospital. Each of those roles has required attention to fundraising as a source of philanthropic income. In total, he has personally touched and led teams that raised gifts amounting to over a billion dollars.

Howard was inspired to write Getting to Giving: Fundraising the Entrepreneurial Way by all of these experiences. He was frustrated to see fundraising done badly, especially as nonprofit management professionals faced increasing challenges. He was increasingly asked for fundraising advice, by individuals and organizations. He decided to share what he had learned, in this book.

Shirley shares Howard’s commitment to nonprofit management excellence, and experience in both business and nonprofit settings, over a 29-year career. After graduating from Dartmouth College, she became a high school teacher.  She then decided to make a foray into business, and joined Procter & Gamble Canada as a product manager. Next came an experiment in combining her two interests – education and business – by earning a master’s degree in educational administration, planning and social policy from the Harvard Graduate School of Education.

Ultimately, Shirley decided to remain in the private sector as a management consultant, and provide assistance to nonprofits in that capacity. She joined and became a partner at a firm that has evolved over the years into Oliver Wyman. Her consulting work focused on organization and process redesign and change management across a variety of companies and nonprofit institutions in the U.S., Canada, Europe, and Africa. She also served the Boston Public Schools as a pro bono consultant, working to improve its human resource management and information technology management capacity.

After resigning from Oliver Wyman, Shirley has continued to consult as a solo practitioner. She also was lured back to HBS, where she had briefly worked as a research associate after graduating from HGSE. In total, she has written over 50 case studies and notes, as well as participating in course design for MBA and executive education programs. Her work with Howard began on an MBA course. As he shared his passion for and thinking about philanthropy and fundraising, she became committed to bringing his knowledge and experience to the philanthropic world.

Deborah Sinay is the practitioner’s voice of Getting to Giving, articulating this unique leadership and development strategy in pragmatic terms that guide nonprofit management professionals and volunteers alike through the basic elements of Getting to Giving.

Deborah loves to sell, helping both for- and nonprofit organizations garner the resources needed to achieve their visions. During her media career, she served as Director of Sales and Marketing at WCVB-TV in Boston before becoming General Manager of the CBS and FOX broadcast stations in Providence. Inspired to apply her skills and experience in the nonprofit sector, she accepted the position of Senior Vice President of Institutional Advancement at the Boston Children’s Museum, where she orchestrated a $47 million capital campaign and built a sustainable annual fund. Deborah also has led development efforts at the United Way of Mass Bay & Merrimack Valley, and Babson College. Deborah was inspired to learn, lead and explore at Bay Path College in western Massachusetts, and has taken executive leadership courses at Harvard Business School. She is a fierce advocate for working mothers, and known locally for helping to launch countless careers in both the for- profit and non-profit sectors.