Fundraising Q/A: Any new learnings about how to advance the causes you care about?

I am increasingly convinced that while the cause may be important, communications about the cause are even more important. One piece of new philanthropic research points to a perhaps obvious but often overlooked truth:

If potential donors and volunteers are not aware of existing needs, they will be less likely to engage in philanthropic behavior. Also, more often than not people respond to a perceived need, rather than an objective need.[1]

So, at a minimum, you must get your story out there. And you must communicate it in a way that resonates with whoever you are trying to convince of the worthiness of your cause. Here’s the critical part: You cannot make the assumption that they see the world the same way you do.

There are very few things that everyone agrees on. Let’s take a relatively straightforward example. Your kids deserve a good education, right?

Your town concludes that aging facilities, advancing technologies and changing demographics calls for a new elementary school that will require a significant investment. How will the parents of a five year old react? Yes! And a retiree on a fixed income? Oh great, higher taxes.

The more controversial the cause, the more challenging and important the communications will be.

The Movement Advancement Project (MAP) is an interesting case study. Founded in 2006, MAP is an independent think tank that provides research, insight and analysis to help speed equality for LGBT (lesbian, gay, bisexual and transgender) people.

Whatever your position on gay marriage, there is a lot to learn from the care with which they communicate their message, and the impact that changing from a rights-based argument to a love-based argument has had on public opinion and ultimately the law.

MAP offers resources to help educate and persuade public audiences (e.g., policymakers, media and the American public) and help support LGBT movement audiences (e.g., LGBT organizations and funders). Effective messaging is a core program area, with resources and information about how LGBT organizations can frame issues and run communication campaigns. Among its premises:

Like any movement for social justice, the success of the LGBT movement requires advocates to communicate… in ways that emphasize common ground emotional connection and shared values. And it requires framing conversations in ways that allow non-LGBT audiences to understand the harms LGBT Americans experience through their own eyes.

MAP’s “The Art and Science of Framing an Issue” presents a 12 step approach for answering the question, “What is this about?”  Its “Communications Campaign Best Practices” offers a useful framework and tools for effective campaigns. 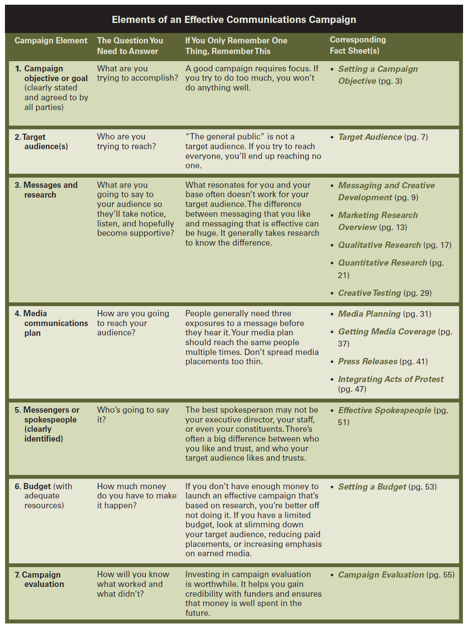 Have effective communications helped the LGBT cause?

MAP also tracks and analyzes the LGBT movement’s progress, pointing to advances that while not entirely due to communications of course, would suggest “yes.” For example, 89% of Americans support equal employment rights for gays and lesbians compared to 59% in 1982, and 57% say homosexuality is acceptable versus 34% in 1982.

In educating people about your cause, make sure to do it from their perspective. And be sure to use their language. Language is about sense making, about how someone thinks about the world. If I’m promoting public education, and someone’s politics tend to the right, I may talk about our duty to help the poor. With someone in the liberal camp, I’ll phrase it as achieving the goals of equal opportunity.

Getting to Giving regulars will note that this is not the first time that I have got on my bandwagon about communications. Here are two other blogs that may be of interest: “The Art of Simple Nonprofit Communications” and “Top Ten Tips for Effective Communications.”

This entry was posted in Fundraising, Fundraising Q&A. Bookmark the permalink.