“This 90-year old museum decides to do a capital campaign…”

Capital campaigns are on a lot of people’s minds these days. Odds are that you are or soon will be involved in one, as a fundraiser and/or donor.  They are not a magic bullet. (More on that another time!)  But used appropriately and done well, they can be a powerful force for advancing your mission in a significant and sustainable way.

What are the “right” reasons for launch a capital campaign? When is the right time? How do you get ready for it? What will make it a roaring – and lasting – success?

Deborah Sinay has offered to share her “how to” experience at the Boston Children’s Museum, where she was brought in as the first institutional head of advancement to spearhead a transformational capital campaign. We invite you to read and reflect:  What lessons can you draw from this case study for your organization?

The Boston Children’s Museum was founded in 1913 by several Boston Public School science teachers. Over the years, it revolutionized the traditional museum experience with hands-on science exhibits, and explorations of cultural diversity. The Museum moved to its current residence in a 125-year-old, former wool warehouse on the Boston waterfront in 1979. By 1999, its 80-person staff was welcoming upwards of 400,000 visitors a year. But Lou Casagrande, the Museum’s charismatic president, and the Board of Trustees saw that nothing short of a physical transformation would be required to keep pace with emerging needs. A major expansion and upgrading of a six-story building[1] would be required.

The vision was a much larger space, more welcoming to children and better suited to collaborative learning. As architects pondered the possibilities, they saw an opportunity to not just update old infrastructure but build Boston’s first green museum. Accomplishing that would require a first ever capital campaign, to be formally launched in 2002, the Museum’s 90th anniversary year. A feasibility study concluded that $30 million was the most that could be raised, given the Museum’s giving history (small donor base) and the competitive environment (over 64 major capital campaigns running in Massachusetts). And that figure was contingent on building both professional and volunteer fundraising capacity.

Deborah was recruited as Senior Vice President of Institutional Advancement – the Museum’s first formal institutional head in June of 2002. Her charter was twofold: raise $30 million by 2007; and build a foundation for institutional advancement beyond the campaign.  Her personal style: unbridled passion for the Museum’s mission, tireless enthusiasm for the campaign, and deep faith in the power of teamwork and collaboration.

The Museum’s silent phase began in 2002. Philanthropy was burgeoning in Boston and many institutions were pursuing campaigns, including the Boston Museum of Fine Arts and the Institute of Contemporary Arts. It was a “cordial competition.” Deborah saw the Children’s Museum’s unique history and charter as its differentiating factor; other Boston museums were just beginning to develop programs around children and families. The challenge would be to target donors inspired by the Museum’s mission and vision for the future. She described one example of that donor-centered approach:

“Carolyn and Peter Lynch were generous philanthropists known for giving to parochial and public schools and other educational institutions. The Foundation gave a gift to the Museum annually, but had never been approached to give a transformational gift.  I called the foundation’s executive director and met with her. We talked about the foundation and its funding priorities. At the end, I asked if we could meet again, this time with the Museum’s program officer and lead educator. She agreed and the dance began.

We met and talked about opportunities that resonated with the foundation. Matching the donor’s needs with our needs; it was a first for the Museum. They got excited about funding a space for early childhood development activities. The next time, we brought the head of exhibit design, to show what the space would look like. The Lynches and came for a tour. After 18 months of effort, we got our first $2 million gift, for the Lynch Early Childhood Center. The Lynch Family Foundation and the Museum were thrilled with the results of their gift and continue to work together.”

A separate website with real-time cameras was set up to let the public follow renovation activities, which lasted through the grand opening of the new Museum and included a complete shutdown for 60 days. The entire building incorporated sustainable design, 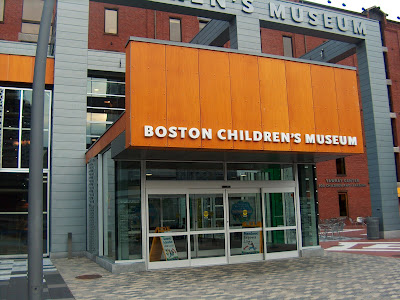 using recycled materials. Children would learn about “living green,” visiting 300 hundred planters on the roof as part of a system to capture and recycle water. The grand opening took place on April 14, 2007. Visitors walking into the building were greeted with a three-story vertical climb became the centerpiece of the new Museum. There was new exhibition space, the early childhood center, a traveling museum exhibit space, new children’s theatre, healthy food areas, meeting and convening spaces for public and private events, and a magnificent front yard that overlooks the Boston Harbor.

Press and public reaction was overwhelmingly positive. Annual visits and memberships soared and continue to grow. The campaign came to a close in 2007, and also was judged a success. The $30 million target had been met and exceeded; total giving came to $47.5 million.  The campaign also laid the foundation for future advancement success. Development, marketing and communications systems were in place. A dormant volunteer organization was mobilized. The annual giving program was given new life. A huge success factor, according to Deborah: “Leadership’s vision and commitment, and an institution-wide team approach to realizing the vision.”

[1] The Museum occupied the first three and a half floors.  The remaining space was used by other nonprofits.

This entry was posted in Fundraising and tagged fundraising case study. Bookmark the permalink.